How To Cure Rising Damp

Knowing What Rising Damp is helps you to understand
how to effectively address the problem - and do so for good!

How To Cure Rising Damp

The very first thing to understand - AQUAPOL is a cure not a treatment for rising damp. Knowing how and why it is so effective makes it your FIRST and ONLY choice to solve rising damp. Guaranteed!

To understand HOW & WHY the AQUAPOL system works, some basic understanding of certain physical phenomena is required. For easier understanding of the key concepts, the explanations in this section have been deliberately kept simple and the complex scientific terminology has been simplified.

There are also references - linking to their respective sources - that you can follow and research further.

How is the AQUAPOL System different?

The primary and key difference in HOW THE AQUAPOL SYSTEM Works is that it addresses the cause of the rising damp in the first place. It does so in an environmently-friendly manner, non-invasively - working with nature. Repairs, repainting, replastering - all cannot be carried out on walls that are still wet, and this is exactly what AQUAPOL focuses on - dehydrating the walls and rising damp precisely, using nature to handle the problem. Your Natural #1 Choice to Curing Rising Damp.

There are no gimmicks or tricks or cover-up story used. Just plain science. Guaranteed. 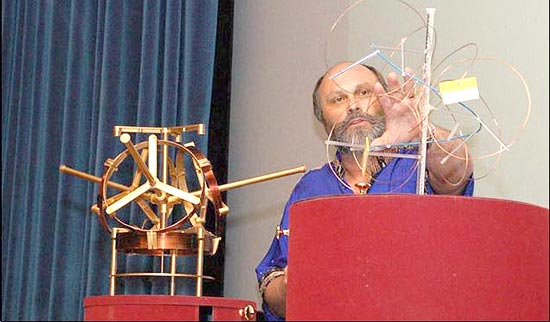 When you are looking for how to fix or repair rising damp, you will find that there are many options available. As we are dealing with a natural phenomenon here - groundwater rising up into the foundations and walls from below the building via capillary action - then this is where the focus must be.

For us at AQUAPOL, there is only one logical, sane answer: Address the cause not the symptoms. This means addressing the rising water in the foundational structure and do so as environmently-friendly as possible. There is no better system that the AQUAPOL System to do this. Proven to do so since 1985.

Read These Pages for More Answers to Rising Damp

The Science Behind The AQUAPOL Effect

Water (H2O), is a two-pole molecule, with one negative (the O–) and one positive (H2+) side. This structural arrangement makes water molecules behave like tiny liquid magnets which can be influenced by external fields.

When in nature building materials come in contact with water, an attraction will take place between them along the contact surface. The negative (–) wall surface will attract the positive (+) hydrogen atoms from water, and overcoming gravity, this attraction (adhesion) makes water rise inside the capillaries. (see below - Fig. BEFORE) 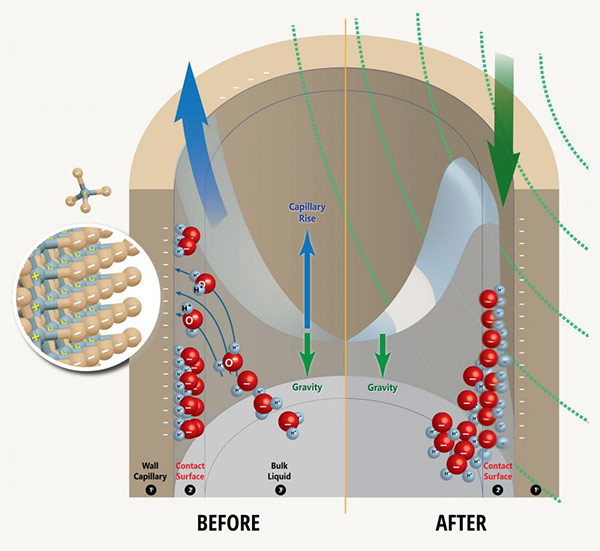 Hydrogen is the most abundant element in the universe, making up about 75% of all matter (stars, suns etc.)

Every atom in the universe is in vibration. Discovered by two Harvard scientists in 1951, hydrogen atoms vibrate naturally at a frequency of 1420 Mhz, known as the “hydrogen line” frequency, which is present everywhere.

The AQUAPOL system captures this frequency, amplifies it and projects it back into the surrounding damp walls. This makes hydrogen atoms along the contact surfaces increasingly vibrate (resonate), until they are “shaken off” the wall surface.

The capillary attraction ceases, gravity takes over and water slowly trickles back into the ground. The masonry gradually becomes dry and remains dry thereafter. (see above - Fig. AFTER)

The AQUAPOL system permanently stays on the premises to keep the building dry for decades. It does not affect hydrogen atoms in the household water supply, and has no adverse effect on any living organism or electronic circuitry.

Physical laws behind the AQUAPOL system

You can briefly read about each of them below. Click the tab button to the left to access the information.

Surface Charges of Water and Masonry

All matter is composed of atoms and molecules, which fundamentally are positive and negative charges. 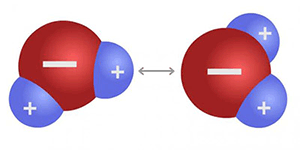 The two most abundant elements on Earth are silicon (Si) and oxygen (O). 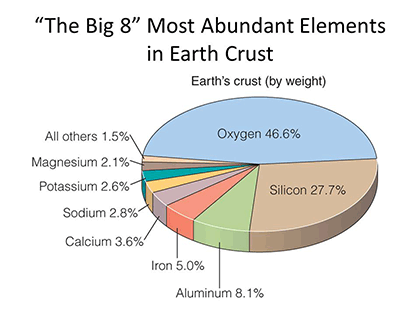 These two elements combine to form the most common mineral group, the silicates, accounting for more than 90% of the Earth's crust. Sand, glass, clay, various rocks and stones are all silicates. The basic molecular structure of a silicate molecule is the (pyramidal shaped atomic structure) - containing a smaller positive silicone atom (Si4+) surrounded by 4 larger negative oxygen atoms ( 4 x O2-) as shown below. 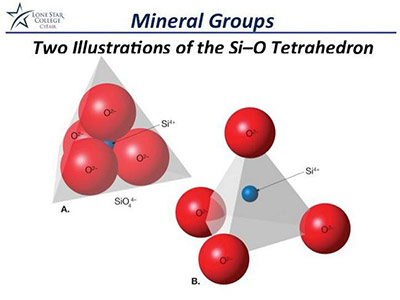 The resulting silicon molecule (SiO4)4- has a negative charge, resulting in a overall negative surface charge for the wall.

The negatively charged wall surface will attract the positive end of the water molecule through an electrostatic attraction. 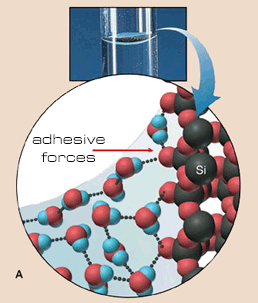 Capillarity or capillary action is the ability of a liquid to flow in narrow spaces without the assistance of, or even against external forces such as gravity. The effect can be seen in the drawing up of liquids between the hairs of a paint-brush, in a thin tube, in porous materials such as paper and plaster.

The phenomenon of capillary action has been widely documented in the scientific literature. The first recorded observation of capillarity was done by Leonardo da Vinci.

The reason why water rises upwards against gravity in narrow capillary tubes can be very simply explained with electric potentials. The negatively charged wall surface attracts the positive end of the water molecules and will gradually pull up the water column. 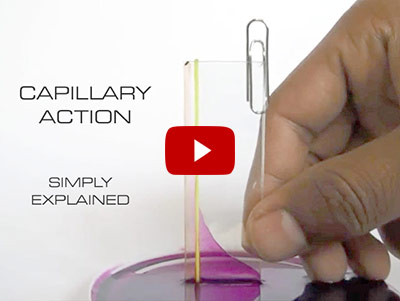 We have seen that the wall surface attracts the water molecules. Here is what happens during their interaction.

At the solid - liquid contact surface (e.g. masonry - water) a complex molecular interaction takes place, which in the scientific literature is known as the double layer. This refers to two parallel layers of potential which is formed at the boundary.

The phenomenon is rather complex and and during the past 150 years it has been researched and described by several scientists such as Helmholtz, Gouy-Chapman, Stern and others. 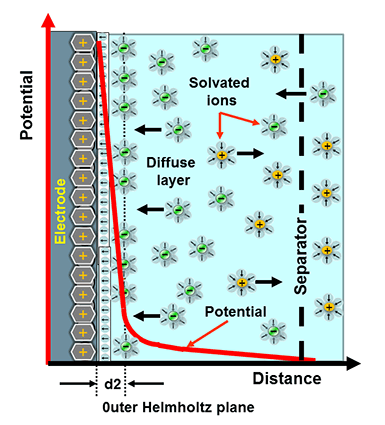 Water molecules alongside the contact surface will be strongly attracted to the capillaries by electrostatic interaction forces.

The electrical double layer described by the University of Cambridge

Hydrogen is the most abundant element of the universe, representing about 75% of all masses. Helium is 23% and all the other elements make up the remaining 2% mass. 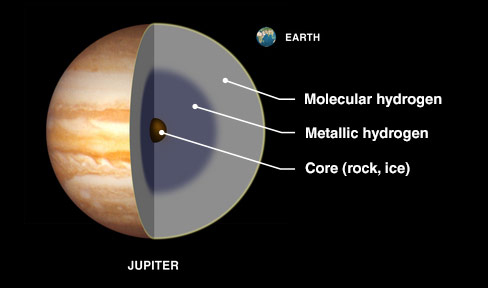 Atoms and molecules are not motionless, they constantly vibrate inside the crystalline structure.

Because hydrogen is the most abundant element of all, the vibrating hydrogen molecules generate a vibration which is perceivable through the cosmos. This is called the hydrogen line, which is a 21 cm wavelength or 1.42 Ghz frequency vibration.

The 1.42 GHz hydrogen line frequency is present everywhere on Earth and throughout the cosmos, and it can be detected and measured. It was discovered in 1951 by two scientists, Harold Irving Ewen and Edward Mills Purcell, at Harvard University. 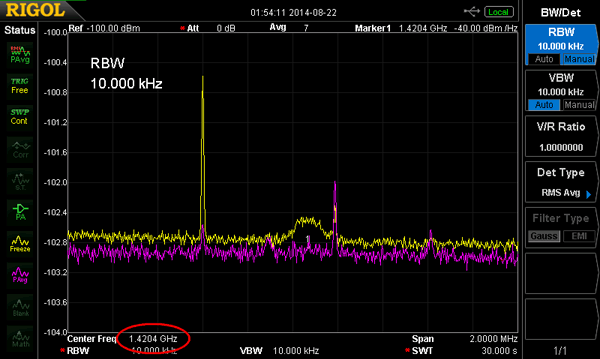 Experimental setup for the detection of the hydrogen line frequency

Discovery of the hydrogen line frequency at Harvard University

Resonance is an energy transfer between two vibrating objects or systems. A vibrating system can make another one vibrate if certain conditions are met.

Resonance can bring down bridges or shatter glass. Vibrations caused by the wind can make a bridge vibrate until it collapses. Vibrations generated by musical instruments (e.g. trumpet) can make a glass vibrate and shatter.

Let's put all this together ...

Go back to Physical Laws Behind the AQUAPOL System »

In order to fully solve rising damp, the capillary water flow must be permanently stopped. This to prevent the continuous build-up of salts in the building fabric, which is the main cause behind the permanent decay of the masonry. There are 2 types of solutions in the permanent category:

These solutions attempt to insert a new damp proof course into the masonry. The wall is drilled or cut-through horizontally with a chainsaw and steel plates are forced into the gap. This stops rising damp, the results are long-lasting but the solution is VERY invasive. For this reason it is not widely used as a solution (nor in the UK).

The latest technological breakthrough, magneto-physical systems such as the AQUAPOL system, due to their non-invasive nature, are particularly suitable for the dehydration of historic or listed buildings.

This solution uses gravomagnetic energy to dry out the walls. It addresses the root cause of the problem by permanently stopping the bond between the water molecules and the wall, and when water molecules can't bind to the wall surface, the phenomenon of rising damp stops altogether.


Discover the Facts About Rising Damp

Get your building analysed for dampness.
Get the facts and information that really matters.
Your journey to permanent dry walls begins here.

NO Obligation Building Moisture Analysis
(valued at R1500! - within a 50km radius of Jhb - T&Cs Apply) 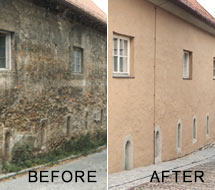 Talk to the rising damp experts - restore the health, aesthetics and value to your building!

Talk To Us Today!